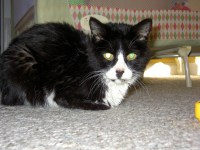 So, there was a rocky time in our marriage when I considered leaving my husband.  Seriously, before you freak out, read on.  There’s a happy ending.

I came from a family of people who liked animals…that lived outside.  We were not indoor animal people.

When I met my husband, he told me that he had a cat and that he’d had the cat since he was 11 years old.  I didn’t really think anything of it.  When I eventually met said cat, Munchie, she was acceptable.  She was a black cat with white “sock” paws and was generally nice to me.

But I should have known it was going to get ugly based on the way my man treated this cat.  He loved her.  Like, loved her enough that he once told me a story about a time he was in college, on a date with a girl (this was before I knew him, of course) and the girl mentioned that her two cats had feline leukemia.  Knowing that this disease was airborne, my hubby abruptly told the girl that the date could not continue and he could not see her again.  He also offered her money for cab fare.   May sound like a jerky thing to do, but he was protecting his cat.

But the cat was part of the deal.  She came with the marriage.  I was sort of okay with it because she appeared to be docile, and like most cats, I assumed that she would spend her days out of my way.

And for the most part, she did.  In the beginning she would occasionally come and sit with me when I was watching TV, or curl up next to me on the couch when I was reading.  But it was a lie.

I think she realized that I was her competition for my husband’s attention.

And that is when the terrorism began.

She would climb up on the bed in the middle of the night and hiss in my face.  She would nip at me, and sometimes she drew blood.  Even though she was de-clawed, she’d do her best to scratch me and everything else she thought belonged to me.  She would “relieve” herself ON.MY.STUFF.  One time she “went” in my school bag, all over tests that I had brought home intending to grade.  Well, of course, those had to go in the trash and my students were thrilled.  And when we moved from our apartment to our house, she began taking care of business all over the place.

My husband tried to help.  He took her to the vet and she was given medication to “control” the problem, but I knew this wasn’t a medical issue.  She was just evil.

It was me v. the cat.  After the 9000th time of dealing with her feline rage, I finally freaked out- like, lost it.  In a very undignified, ungodly, unladylike manner.  Meanwhile, the cat purred her happy little self against my hubby’s leg.  Are you getting the picture?

And then came my ultimatum to my husband.  “It’s me or the cat.”

My hubby has never been a fan of my “dramatic streak.”  He stared at me for a good ten seconds, not speaking.  Then very calmly, he climbed into the attic and got down my suitcase, handed it to me, and offered to help me pack.

And I was defeated.

He did try exceptionally hard to get the cat under control from that day forward, but she was a cat.  And she hated me.

She finally died the day after Thanksgiving, 2007.  She was 21 years old.  And I felt really, really bad for my hubby, but inside, I’m not gonna lie, I had a little party.

And when our “intense fellowship” occasionally gets a little too intense, my husband, in his too-cool-for-school manner will ask, “do I need to get your suitcase down?”  It’s great to remember that there are no problems we can’t overcome together.  And I’ll never live down that gentle reminder of who actually wears the pants in our relationship.

And we will never, EVER have another cat.

Share with me:  Are you an animal person?  Has an animal ever caused “strife” in your relationships with family, friends or neighbors?  How did you deal with it?