Anyone a fan of the now-canceled show Lie to Me? The lead character was an expert at reading body language and could tell just from a tick or slight muscle movement if a person was not telling the whole truth. I loved that show. Fascinating. Maybe it’s because I like to think that I’m pretty good at reading people, most of the time.

A thousand words–that’s how much, roughly, can be used to describe the emotion behind one good expression. Like a picture, expressions convey so much more than “face value.”

If you are a functioning member of society, then you know that body language often does more communicating than words ever could.

And it’s those expressions, along with body language, that draw me into the story of a character on TV or in a movie, and even in a book; that make me feel what they are feeling, that make me yearn to comfort them, to help, to laugh, to seek revenge, to form friendships, to empathize with, and even to love.

Why do you think that romance authors often write about “long, gazing, lingering looks” between characters?  To use facial expressions, most of the time the eyes (windows to the soul, you know) to convey emotion, and sometimes even dialog without using words.

It’s tricky. It’s like magic. If done well, you don’t even realize that you are getting understanding from an expression and nothing more.

My personal preference is to cut out those long glances that are so cliche and try to replace them with a little more–to give the reader something deeper than just “a look.”

My wonderful critique partner once pointed out to me that in a story of mine that she’d read, not only was I describing expression, but the emotions behind them, too. I wasn’t trusting my reader to be able to figure out how the character was feeling based on body language. So, it’s something I’ve been working on–conveying unspoken emotion. Replacing the thousand written words with the description of body language.

To do that, I call on some of my favorite emotional/romantic moments from TV and movies.

I love, love, love when a good expression delivers emotion so powerfully that it gets my heart racing or makes me swoon.

That’s one of the reasons I love Ian Somerhalder as Damon on Vampire Diaries. His expressions, specifically when Damon is angst-ridden or struggling between his love for Elena and his need to be the vampire that he is, are amazing, and covey exactly what you think and assume his character is feeling. In those emotional moments, I don’t need dialog.

As stupid as it may sound, there have been three times during three different episodes when I just wanted to jump into the TV and become a part of that world–and it was all because of an expression on his face. 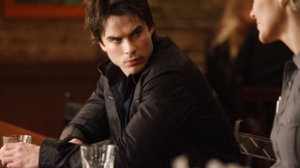 Another example of perfection in expression comes from one of my favorite movies, Becoming Jane. Below is the scene when Tom LeFroy (James McAvoy) asks Jane Austen (Anne Hathaway) to run away with him. But before that, when both are struggling against the emotions they feel for one another, McAvoy’s expression conveying his inner turmoil is PERFECT in the moment just before he defies all he knows and steals a kiss from the woman that he loves. *dreamy sigh* The rest of the scene is good, too, but that moment, to me, is perfection.

Inspiration of the Week: I’m working on a story right now where our hero is not one to openly convey what he’s feeling. He’s closed off from the idea of being emotional and wordy and doesn’t like people who are (specifically women). However, he’s still the hero. Here’s a song that has definitely been inspirational to me in writing this character so far.

Kris Allen–Written All Over My Face

Share with me: Can you think of a movie or TV moment when a character gave such a good expression that you fell more in love with the character or the story?  What about a book moment when the faces were so accurately described that you could envision that expression precisely?