The Tower of “Babble”– What Did You Say? 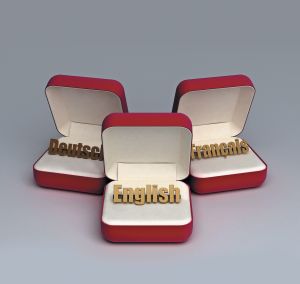 I had a crazy dream the other night.

It was one of those dreams that sticks with you. One that you wish you could psycho-analyze so that you could better understand the subconscious.

In my dream, I was speaking Spanish. Fluently.

How weird is that?

I did minor in Spanish in college, but college was a while a few years ago, and I haven’t really practiced much. I certainly wouldn’t label myself as being anywhere near fluent.

Just a few hours before I had this crazy dream, I was reading a Bible story to my kids–it happened to be the story of the Tower of Babel. (Again, I think there are crazy things going on in the subconscious here…)

I explained how the people built a tower to heaven, claiming to want to be like God, to receive his glory merely for their ability to construct.

But how did God do it? How did the people go from understanding each other perfectly one day to complete confusion between the tongue and ears the next? A flip of a switch somewhere in the brain?

And then I have that crazy dream where I’m speaking Spanish. And all the people around me are, too, and yet we understand each other. And in the dream, I knew Spanish was not my first language, and I realized that ability to speak and understand the language so well was pretty cool.

And since the dream stuck with me, it got me thinking–maybe somewhere in our subconscious we do have the ability to understand each other. Perhaps that switch, the one God flipped, hasn’t been removed from us completely, but is in there, waiting to be flipped the other way. Perhaps we do have the ability to comprehend and communicate in whatever language we choose, without having to study or master it. But God has turned it off as punishment for man’s arrogance at the Tower of Babel, and someday he’ll turn it back on.

Someday when we’re all in heaven, there were be no language barrier among believers. There will be no need to have to learn new languages in order to communicate.

Instead, we’ll all speak the language of God fluently.

For now, I’ll hope I have more dreams like the one I had. I’d like to master French and Italian in those. At least I know that somewhere, deep down, I might have the capability to do it.

It makes me wonder what other God-secrets are hidden in our subconscious, waiting to be unlocked.

Share with me: What other God-secrets do you think might be hidden in our subconscious brains? If you could choose one language (other than your own) to be fluent in, which would you choose and why?

Filed under The Christian Walk

5 responses to “The Tower of “Babble”– What Did You Say?”