A friend of mine recently posted a question on Facebook, asking his friends which critically acclaimed film or blockbuster movie they just didn’t enjoy like the rest of the world.

Lots of answers were given. O, Brother Where Art Thou. The Hangover. Star Wars (my answer). Lots of arguments were started.

That same week I happened to catch a movie on TV that I do enjoy–one I’ve seen a few times before and had no trouble watching again.

The romance, I think, is great.

The scenery is breathtaking (what isn’t shot against a green-screen, that is.)

It’s got good looking people in it.

It was a box office bomb and to the critics, a mess.

When I say the movie bombed, I mean it.

The movie is Leap Year.

You know, the one that came out a couple of years back starring Amy Adams and Matthew Goode? 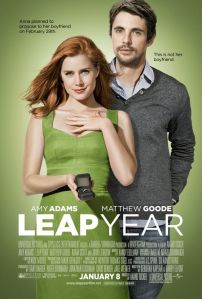 It’s not my favorite movie or anything, but it’s a cute, happy movie that leaves me feeling good when it’s over.

Maybe it’s because it took place in Ireland and you know, good looking guy, Irish accent…yeah, that’s a recipe for success, one would think.

Maybe I like it because it’s got some really funny bits.

Maybe it’s because no matter what she does, Amy Adams comes off as adorable.

Maybe it’s because the back-and-forth romantic tension is great.

Maybe it’s because when Declan utters the line, “Mrs. O’Brady-Callahan, where are ya goin’?” it’s one of those melty-swoony moments.

Regardless of how the formula adds up, critics hated it, the majority of audiences hated it, heck, even Matthew Goode hated it and stated that he only did the movie because he was contractually obligated.

Whatever. I love it.

Some others that were box office bombs but I love them: 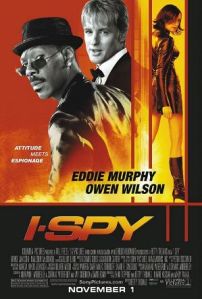 I have no idea why, but this movie makes me laugh hysterically. I distinctly remember just about falling out of my chair when I saw it in the theater. Don’t judge me.

This is subjectivity in the arts at its finest, folks.

Share with me: Is there a box office or critical bomb that you love, even though the rest of the world hated it?